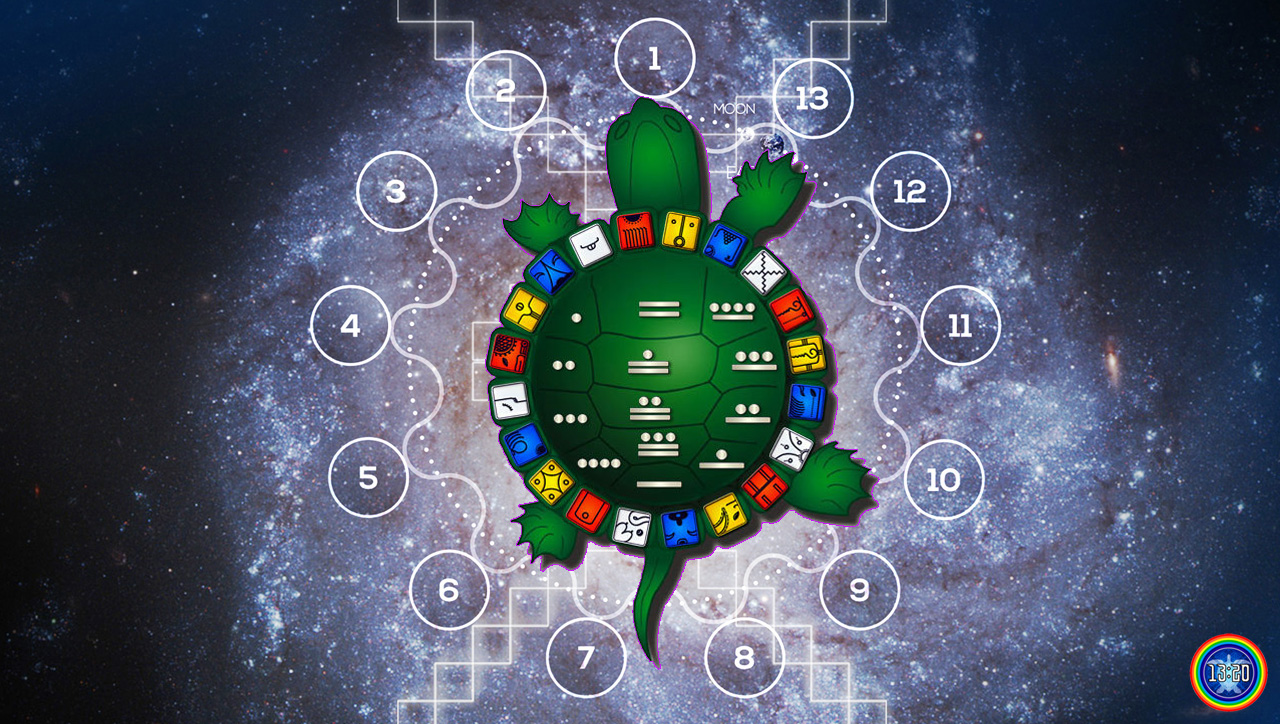 Turtle of the Thirteen Moons: Indigenous Time for All Humans

All Indigenous Peoples of the Earth know and respect the wisdom and power of the turtle. Within turtle’s shell is the knowledge of time and the wisdom of the thirteen moons. Turtle’s wisdom is the power of cosmic knowledge. 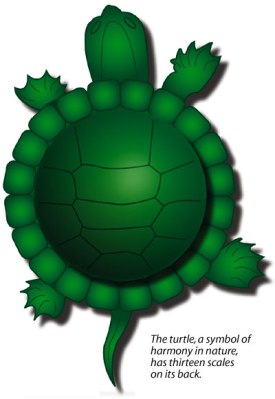 In the original time, turtle’s wisdom was known by every child of the Earth. Every child knew that thirteen moons is the path to walk. It is the path of life that needs no explaining.

After the original time came the seeds and the planting. Then came the sword, and the forgetting. During the last four hundred years the Indigenous Peoples of the planet retreated deeper into the forest, the wilderness, the jungle. Wherever they went, they were followed by the machine and the twelve-month calendar of colonialism. Deprived of their own time, the Indigenous Peoples were forced into the false time of the machine.

Now it is 1993, proclaimed by the United Nations as the Year of the Indigenous Peoples. Once again the memory of thirteen moons has been released from turtle’s back. One turtle scale for each moon, thirteen perfect moons of 28 days each. Four phases of the moon, four perfect weeks of seven days to every moon. Thirteen perfect moons, 52 perfect weeks, 364 days, plus a day out of time every year. This is the perfect wisdom of turtle’s thirteen scales.

July 25, day out of time. Celebrate the advent of galactic culture on Earth. Return to the indigenous path of the thirteen moons. Awaken to the dawning of a culture of peace on Earth.

All children of the Earth are indigenous to the Earth. Turtle Island is their heritage. Thirteen moons is their way.

Ask turtle: What does it take to set the thirteen moons in motion?

Turtle replies: 20 fingers and toes are needed to set the thirteen moons in motion. 20 human tribes are needed to make Turtle Island a worthy timeship swimming in the  great galactic ocean.

20 tribes of time organized into four great clans can dance and play the thirteen moons into motion: the yellow fire clan, the red blood clan, the white truth clan and the blue sky clan. Each clan has five tribes; the 20 tribes of time.

13:20 is indigenous time, thirteen moon time. We are not the first to know this. More than 1,000 years ago, the Indigenous Maya of Central America kept the most accurate calendars every known. They knew the count of the thirteen moons and much more.

The Thirteen Moons of Turtle Island

It all starts this year, with a Day Out of Time, July 25, 1993. Celebrate the end of the old time and the coming of the thirteen moons.

Turtle says: thirteen moons make one year. For Turtle Island, time is measured in wavespells. Thirteen moons, or one year, is one complete wavespell of time. A wavespell is the galactic measure of time. A wave is motion in time, and a spell is what is known during that motion of time. This is what turtle knows swimming in the ocean of galactic time.

Thirteen moons, one wavespell, a common path to be walked by the 20 tribes of time. Each wavespell is a movement of thirteen steps. It takes thirteen steps to complete and know one spell of time. Child of the morning, child of the sun, follow the Earth wisdom path of the thirteen moons. Be in truth and rhythm with all that is. Become a sovereign human in your time.

The thirteen-step wavespell can be walked by yourself in everything you do. Ask and answer these questions for yourself. Walk the thirteen moon wavespell path and become a sovereign autonomous human.

Together with all the children of the Earth, you can walk thirteen moons. Together on the thirteen moon path you can attain abundance and equality for all, for seven generations to come.

Following the Wavespell to AD 2013

Turtle says: the way of the wavespell is found in my back. With your finger, follow the numbers on turtle’s back beginning with a single dot for one, bar for five, up to two bars and three dots for thirteen.

The path you trace with your finger is a wavespell. The dot bar way of writing numbers is a gift of the indigenous Maya.

The Mayan way of writing numbers is simple. With the up to four dots and three bars, nineteen numbers can be created, plus one sign for both zero and 20.

For Maya, zero is like a shell, both full and empty. With this full and empty zero, the Maya perfected the 20 count. This zero-based 20 count is more accurate, flexible and vast than the non-indigenous ten-count. Before the coming of colonialism, the Maya were the indigenous Earth custodians of the galactic measure of time. This is why their calendars are still the most accurate known to Turtle Island. Of course, Turtle also remembers all of this.

Turtle says: You can learn to count the Indigenous Mayan way by learning the 20 tribes on your fingers and toes.

Turtle says: 20 tribes, 20 fingers and toes. That is all it takes to guide Turtle Island to AD 2013. AD 2013 is an island in the ocean of time where turtles come to renew themselves in the full glory of the sun.

Walking the sovereign wavespell path of thirteen moons, the solar children of them 20 tribes of time can guide Turtle Island to AD 2013. 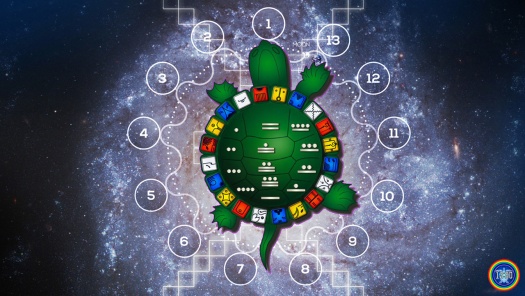 Turtle says: Swimming in the galactic ocean, Turtle Island gauges its direction by two spins. The 365-day solar spin measured by the thirteen moons goes one direction. Another spin of 260 days goes the other direction. It is the 260-day counter-spin that is the measure of the thirteen moons.

The 260 day count is the tzolkin or sacred count of the ancient Indigenous Maya. The 365-day spin anchors Turtle Island to the sun. The 260 day counter spin anchors Turtle Island to the galaxy and cosmic time. The 260 day-count is the galactic standard of time. The calendar of colonialism could know nothing of the galactic standard because it is based on twelve months and not thirteen moons. Thirteen is the cosmic number. Just count the scales on the turtle’s back.

The 260 day count consists of the 20 solar tribes combined with the 13 numbers of the wavespell. 20 time thirteen equals 260. This means that the 260 day count has a spin of 20 wavespells, the galactic standard of indigenous 13:20 time. 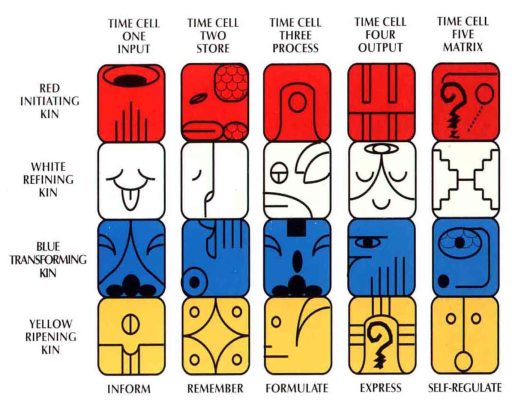 In the sacred count, every year your solar birthday rotates through one of four tribes, and one of thirteen numbers. Since there are 365 days to the solar spin and 260 days to the galactic spin it takes 52 years for the two spins to meet at the same place again! It takes 52 years to completely know your own Earth Family.

There are some of the wonders of indigenous Earth time we could not know about by following the twelve-month calendar of colonialism.

Now you can learn more about 13:20 time by playing a game called Dreamspell: The Journey of Timeship Earth 2013. The Dreamspell shows what can be done to safely navigate Turtle Island to its island in time, AD 2013. Just as turtle has the wisdom and knowledge of time on its back, so Turtle Island is a Timeship navigating the waters of the galactic ocean.

Turtle says: If you want to find out more about the secrets of time held in turtles shell, then you must find the Dreamspell game and learn how to play the Earth Sovereign Way!

Indigenous wisdom is of the Earth. The Earth is our sovereign home, our Timeship, our destiny to know. Listen to the wisdom of our indigenous heritage, the words of Black Elk, a Lakota Medicine Man:

”Then I was standing on the highest mountain of all and around about beneath me was the whole hoop of the world… And I saw the sacred hoop of my people was one of many hoops that made one circle, wide as daylight and as starlight, and in the center grew one mighty flowering tree to shelter all the children of one mother and one father. And I saw that it was holy

“Then as I stood there, two men were coming from the east… They came and gave a herb to me… It was the day break star herb, the herb of understanding, and they told me to drop it on the earth. I saw it falling far and when it struck the earth it rooted and grew and flowered, four blossoms on one stem, a blue, a white, a red, and a yellow; and the rays from these streamed upward to the heavens so that all creatures saw it and in no place was there darkness.”

This July 25, take a Day Out of Time.
Take time to return to the path of the Thirteen Moons.
Let Turtle Island sail free once again in the ocean of Galactic Time. 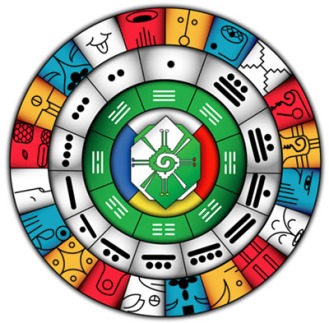 Thirteen refers to the thirteen galactic tones or powers of creation, which are also encoded in the thirteen moons or annual lunations. 20 refers to the 20 solar frequencies encoded as the 20 icons or solar seals. Upon this timing frequency was based the tzolkin or 260-kin “sacred calendar.”

Combined with the solar cycle of 365 days, the tzolkin gave the Maya the fractal yardstick by which they could construct calendars and timing systems that demonstrate the harmonic order of the solar system and galaxy in general. Within these constructs, the Maya also maintained lunar calendars and eclipse cycles of utmost precision.

Because the basis of the Mayan calendar was the 260-kin tzolkin and not the 360 degree circle, there was no need to correlate the lunation cycle to the solar year through the abstract concept of ‘months.’ The Mayan mathematic, based on an elegant and more sophisticated dot-bar notation system, is vigesimal not decimal, that is, based on 20’s rather than 10’s. This gives the Mayan mathematical system a fractal and exponential flexibility not exhibited by the decimal or duodecimal (by 12’s) system upon which the Gregorian calendar is based.

The fact of the matter is that the Mayan calendar contains the teaching of fourth dimensional time that has eluded modern science, immersed as it is in the unexamined grip of third-dimensional Gregorian time. The nub of the Mayan teaching is the application of the 13:20 frequency to the creation and implementation of the calendar of the thirteen moons.

Note: This reconstructed publication is for Educational Purposes Only and not for profit. All copyrights belong to the authors, José and Lloydine Argüelles, and are used under Fair Use for educational purposes only and to honour their memory.

5 Replies to “Turtle of the Thirteen Moons”