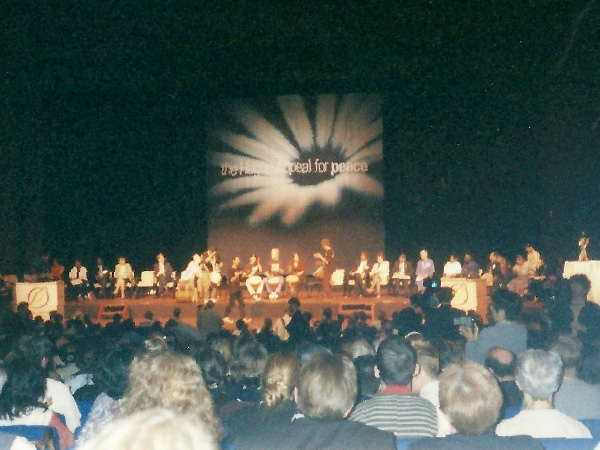 Crystal Day Round Table Report: A Rolling Wave of Peace

Dear Planetary Kin,
It is with great pleasure that we file this special report on recent and forthcoming activities to assure a time of peace to replace the time of war.

It was with only a week’s notice that we knew that we had to travel to Europe to attend the Hague Appeal for Peace in the Netherlands. Joining us in our travels was the intrepid new time scientist, Mark Comings, Red Spectral Skywalker. The kin of PAN Holland rose to the occasion brilliantly and provided full support, not only for our visit, but for that of Chief Arvol Looking Horse and his assistants, Chris WhiteCloud and Fidel Moreno.

Like ourselves, the Chief only knew about the Hague Appeal of Peace a week in advance. But that which Spirit knows will further the cause of peace and justice, Spirit furthers. Provided by the first Hague Peace Convention and its follow-up in 1907, everyone had to agree that the last 100 years were the bloodiest in all of human history and that the peace provisions drawn up over the past 100 years have had little effect in forestalling war and terrorism.

Some 1,000 peace groups were represented and over 8,000 people were in attendance. The result was sheer chaos spiced by the creative ferment of networking. The backdrop of the war in the Balkans added a certain sense of urgency, but it was difficult to arrive at a consensus and the organizers were not willing to come to any resolute conclusions.

The 12:60 belief system unfortunately pervaded the mind-set of most of the highly well-intentioned participants who maintained a belief in the power of governments to bring peace, and to view peace itself as a political issue.

Our approach is more radical, and says: to have peace, be peace, live peace, act peace. To assure that you are able to do this, leave the time of war by getting rid of the calendar of the time of war and replace it with a calendar of peace. Then you will have a time of peace. In the 12:60 mind-set, peace is treated like the pleasure principle, and is continuously postponed in favor of a “peace process” which does not get to the root cause or causes of war, much less address peace positively from a creative spiritual standpoint.

To its credit, the Hague Appeal for Peace did have on its agenda the creation of a “culture of peace.” Of course it was Nicholas Roerich who spoke so eloquently and pronounced the principles of a culture of peace through the Roerich Peace Pact. One of the groups present was the Nicholas Roerich group from Moscow whose workshop we attended, and where we were able to present thirteen small Banners of Peace, which we urged be taken to the streets around the Kremlin and Red Square.

On late Friday afternoon we were able to make a small group presentation in the “spiritual prayer and meditation room,” set in a far corner of the mammoth Congress Hall Convention Center where the Hague Appeal for Peace occurred. But while the official Hague Appeal for Peace spun its wheels in proposals for, among other things, a new International Criminal Court, we ably used the time to network with the Indigenous peoples and rally around the cause of Chief Arvol Looking Horse.

There is no question that the Chief is the Man of Peace in the mold of Ghandi or Martin Luther King. The theme of forgiveness and reconciliation (recently sounded by Minister Farrakhan as the process of atonement) is the main premise in the Chief’s message of peace. But the power of Chief Looking Horse comes from the multiply rich roots of the Lakota (Sioux) Indian heritage, which includes the Battle of Wounded Knee. Each year between 1986 and 1990, in the bitter cold from December 15-29, Chief Arvol Looking Horse rode with the Big Foot Riders recreating the last ride of Chief Big Foot before the ill-fated battle of Wounded Knee.

It was this great spiritual journey that placed Chief Looking Horse on the transcendental side of peace. He knew that the Red Man could harbor no more hate, no matter how painful the defeat, genocide and displacement had been. In fact, Chief Looking Horse knew that if the Lakota could overcome and forgive, that this message of peace could be taken to the entire world. So was born the vision of World Peace & Prayer Day.

We knew that even though the Chief was not on the official closing Plenary Session that we had to get him on stage to give a prayer and a spiritual message. We met with members of the Indigenous peoples, mostly Pacific, Tibetan and North American in origin, who came up with a plan. The Plenary Session included speeches by luminaries such as Kofi Annan (who had to leave very suddenly in the middle of the program) and Queen Nur of Jordan. At one point a representative of the Indigenous Peoples was to address the Assembly. It was at this point that we put our plan into effect. We sat in a row, at the end of which was Chief Looking Horse.

When the moment came, Chief Looking Horse and our entire row got up and marched to the stage, the Chief singing a Lakota song all the while. On the stage we stood in a long row. In the center of the row was Valum Votan, holding a Banner of Peace. To his left was the Pacific-Tibetan contingent, to his right, the North American group. The Maori representative spoke her piece, followed by Chief Looking Horse who was able to announce the World Peace & Prayer Day. Our moment of spontaneous improvisation proved to be a great photo op. Holland was a very successful experience for both Chief Looking Horse and the Thirteen Moon Calendar Change Peace Movement.

In addition to our mutual sharing during the Hague Appeal for Peace, we also came into contact with a person who, having read the Mayan Factor, spontaneously came forward to fund the World Summit on Peace and Time and the World Peace & Prayer Day.

On our last afternoon in Amsterdam, we had the pleasure of addressing a gathering of more than 200 Dutch Kin. Also with us for the presentation, along with Mark Comings, were Rainier Berchtold and Monika Bender of PAN Germany.

The rolling wave of peace was launched. Since our return we have met again with Chief Arvol Looking Horse, and with his assistant Chris WhiteCloud. We have arrived at a deep understanding of our mutual goals and purposes. There is no way to peace. Peace itself is the way.

We will go to Costa Rica and we will pray peace, and establish a peace plan that will bring peace to this planet. The forces of good will are now understanding what a powerful point is made by the Calendar Reform to replace the old calendar is to actually disincorporate all the old institutions. In the calendar of the new time, there is no place for war. Peace will come. We include our statement of Mutual Support.

There is one Creator, one plan, one time to come together and synchronize for world peace. No past, no future, no problem. We wipe away the tears. We dissolve our boundaries. We reconcile and we forgive. We stand together as one nation of peace. Peace is the way. By becoming a sovereign nation in the new time of peace, peace will be restored on Earth. This is how it is. Aho!

World Peace and Prayer Day is the time to pray with the Earth. The World Summit on Peace and Time is the time to prepare for the time of peace. To choose a time of peace is to exercise our right to peace. To become a sovereign nation of peace synchronized in time, by time, as time, is a choice we make on behalf of the Earth for seven generations to come. We do this that the hoop of the nations may be healed and the tree of peace flower in the center once again.

To go from a time of war to a time of peace we must give up separation and thinking about what divides us. To realize peace, we must unify with all that is. This is done here and now. Peace is in us, so it is for us to become peace. To go to a time of peace, you must consciously leave the time of war. This is a choice we make.

We recognize in making this choice that the colonialism of the time of war has been locked into the Gregorian Calendar since the year AD 1582. This is the year that the sacred time of our ancestors was foreclosed. We lost our land. We lost our time. We lost our pride. But we have learned to forgive and so the doors to sacred time are opening for us once again.

Mutual support is the law that binds all followers and keepers of the true inner flame of peace. We are in support of the Indigenous People of the Earth, and we are in support of the new calendar of peace to replace the old calendar of war and colonialism. We affirm this support with an attitude of forgiveness and reconciliation, for this is a sacred path and a sacred thing we do.

By taking the step of supporting the People’s Declaration of Calendar Reform we are securing the return of sacred time. With sacred time there is sacred order and the establishment of the culture of peace. We ask all peoples to join us in returning to the sacred time. This sacred time has always been. it is only by living in the artificial time that we could forget about the sacred time. Now we see the way of time, and the time of peace is calling us. Reform the calendar, return to sacred time through the Calendar of Peace.

To take up a new calendar is to disincorporate the old order. Let there be a new sovereignty in time. Let the hoop of the nations be made whole in the shining light of sacred time. This we shall accomplish by the exercise of our sacred right to peace.